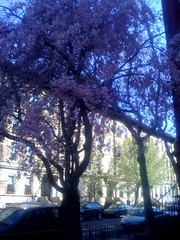 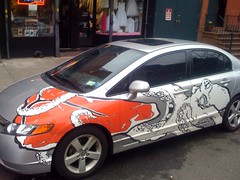 Octopus eating steak
Originally uploaded by chuckm.
This car has been around the neighborhood recently. Surreal and cool.

Think of 25 albums that had such a profound effect on you they changed your life or the way you looked at it. They sucked you in and took you over for days, weeks, months, years. These are the albums that you can use to identify time, places, people, emotions. These are the albums that no matter what they were thought of musically shaped your world. When you finish, tag 25 others, including me. Make sure you copy and paste this part so they know the drill. Get the idea now? Good.

Readers should feel free to guess (or ask) why particular albums are there.

First 10 are pretty much chronological... little fuzzier after that.

This has been making the rounds on Facebook for months.  I figured I'd post it on Livejournal since it crossposts to Facebook anyway (I'll tag folks once it gets over there, but most of you have already done this).  This is tough for me because I've gone through so many of these random facts things here before that most of these will be repeats, so appologies if you don't learn anything new.

Rules: Once you've been tagged, you are supposed to write a note with 25 random things, facts, habits, or goals about you. At the end, choose 25 people to be tagged. You have to tag the person who tagged you. If I tagged you, it's because I want to know more about you.

(To do this, go to “notes” under tabs on your profile page, paste these instructions in the body of the note, type your 25 random things, tag 25 people (in the right hand corner of the app) then click publish.)

1. I had voluntary jaw surgery at the age of 19.  Ever since I've had three small pieces of titanium screwed into my skull around my mouth.
2. They dont set off metal detectors
3. I've played bass for 18 years.
4. I've played the *same* bass (my red Rickenbacker) for 16 years.
5. I started as a keyboard player in High School,  but switched to bass when I realized it would let me move around on stage
6. It's only been in the last year I've started moving around on stage when I play bass
7. For several years in college I only cut my hair twice a year.
8. I dropped out of college after my first year.  I took a year and a half off, learned bass and joined my first performing band.
9. When I went back to school I was normal school age.
10. I graduated with two degrees -- a BA and a BS.
11. I worked for the Cincinnati Public Library all through college.  To this day it was one of my favorite jobs.
12. I finally had to quit because the enacted a strict tardiness policy
13. I am almost always 15 minutes late to everything.
14. I had to drop acting classes in college for the same reason.
15. I've worn glasses or contacts since 2nd grade.
16. I've had braces on my teeth three times
17. My grandfather once took the whole family to an all you can eat buffet.  I announced "This must be the most expensive restaurant on earth!"
18. I literally ate mysef sick.
19. I have a scar in my right eyebrow from when I ran headifrst into Toby Thompson in 4th grade and my glasses jammed into face.
20. As a child, I detested pizza and popcorn (popcorn because of an aversion after a bought of the flu, not sure why I didn't like pizza)
21. My two favorite bass players of all time are Simon Gallup (The Cure) and Mike Mills (REM)
22. But I secretly want to e David J (Bauhaus/Love and Rockets)
23. I can wiggle my ears.
24. I can also wiggle my hair line.
25. My second toes are longer than my big toes.

Heh. That one never gets old.

lindaleeb !  I can't wait to see what adventures *this* year holds!

Now, on to documenting my life.  Tonight I've been busy working on a little Hidden People project.  A couple of weeks ago, when we played over at Trash Bar, we threw down the cash for a sound board recording.  Dana was sick as a dog and I was having issues with on of my amps cutting out, but when we listened back the results were... actually kind of good.

It's live recordings of new material so they're a little rough, but with enough lipstick some of it might just be presentable.  I'm splitting it up into individual tracks and tweaking the EQ a little bit right now.  Odds are likely you'll get to hear some new songs by this weekend!  If you've checked out the live video of Rain Dance  over on our music page (or seen any of our recent shows) you've gotten a taste of our new, thicker sound.  We're really pleased with the direciton things are going.  Now we just need to find someone to record them for real!

Lots of conference calls tomorrow, so I should probably get some sleep.  Then drinks to celebrate LLB's birth.  I'm suspecting Friday may be a bit of a wash...

So I've decided to stop pushing my Twitters out to Livejournal.

For years Livejournal was the end all, be all of my online journaling.  Then with the onset of the social networking boom, there seemed to be this great diaspora of people leaving LJ to hang out on whatever flavor of social network most appealed to them.

When I first set up Twitter reposting, it seemed a great way to update once and push to all the various social pockets and tide pools that had sprung up.

Now that things have settled down a little bit, I think what has happened is that each of the social networks has established its own identity:  Twitter for short, impulsive communications; Facebook as a sort of catch all, dynamic personal profile, MySpace for endless spam from bands, personal Blogs for those that are serious about their online writing, and Livejournal for long form diary entries.

I'm hoping by pulling the plug on the Twitters it'll force me to go back to using LJ for its original purpose, and have the nice side effect of reducing the redundant content for my friends that already get the Twitters elsewhere.

The first five people to respond to this post will get something made by me!

my choice. for you. this offer does have some restrictions and limitations:

- I make no guarantees that you will like what I make!
- what I create will be just for you.
- it'll be done this year. no guarantees when, it will be a total surprise!
- you have no clue what it's going to be. it may be poetry (haha! no.). I may draw or paint something. I may make you a compilation cd, I may carve a monument out of granite, who know's! not you, that's for sure!
- I reserve the right to do something extremely strange.

the catch? oh, the catch is that you have to repost this, and repost right away. we can all make stuff and make someone's day a little bit brighter!